QUIC (Quick UDP Internet Connection) is a UDP-based Internet transmission protocol which is developed by Google and is of lower latency. It is a new-round integration and utilization of the existing network transmission technologies between the application layer and the network layer, to improve the transmission efficiency and minimize latency. The core technologies of QUIC include: HTTP/2, TLS 1.3, TCP FAST OPEN and UDP.
QUIC protocol is originally used in the Chrome browser and YouTube video website. With the establishment of the IETF QUIC project team, and the IETF’s announcement in 2018 that QUIC protocol is going to be promoted as HTTP/3.0, QUIC has become widely discussed, applied and developed.
The development of CDNetworks QUIC is based on Google QUIC (gQUIC for short hereafter) version 39, 43 and 44, and it well solves the problems of bad access quality under weak network environments such as cross-ISP and cross-region network. 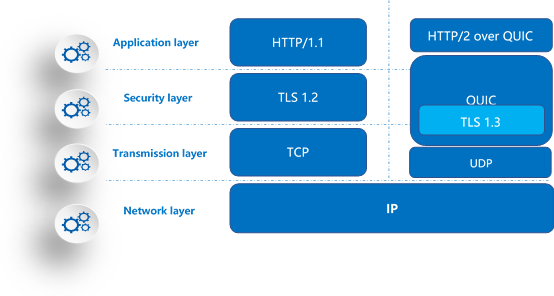 On the basis of the gQUIC protocol, CDNetworks developed the gQUIC scheme as below. 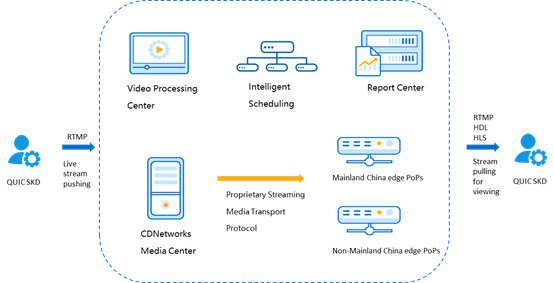 gQUIC for live stream pushing uses an agent scheme of RTMP over QUIC, in which QUIC Agent plays the role of TCP agent to establish connection with client (Ingester) QUIC SDK, switches UDP to TCP and transfers the live-stream data transparently to the CDNetworks Media Center.
Note:
When using this scheme, customers need to use the port 1935/UDP to initiate push-stream requests.
QUIC SDK can be customer’s self-developed SDK or can be provided by CDNetworks. Customer’s self-developed QUIC SDK needs to be in compliance with standard QUIC protocol so as to work with CDNetworks QUIC feature.